Halloween got rained out at our house tonight.

Thankfully, our kids are young enough that they didn't seem to care. Plus, they'd already had a neighborhood costume parade on Sunday (complete with pinata) and trick-or-treating around Daddy's office on Monday afternoon. So they're not exactly starved for candy.

We hit a couple of milestones for Halloween this year. For Junius, it was his first year dressed as something in a full face mask and carrying a weapon (Anakin Skywalker). Wearing the full mask was really creepy -- even though it was just a hard plastic face -- because it made him look so stern and angry. That's not his normal look.

And for Pippi, I suspect this may have been my last year for enjoying her in a non-princess-based costume. The allure of the tiara is strong. But it turns out that the ears were a bigger draw for her this year. 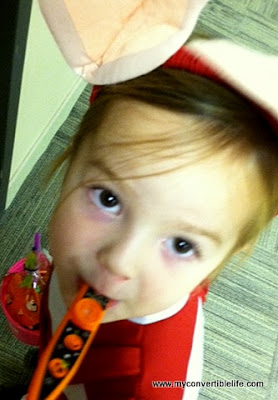 In case you can't tell from the close-up, that's her Olivia costume. I love that she picked that one -- over Strawberry Shortcake and Cinderella -- because it suits her personality oh-so well. Olivia also comes with happy memories for me because I bought a hardback copy of Ian Falconer's original book in French when we were in Paris more than 10 years ago. At the time, I had no idea it was an American story and soon-to-be Nick Jr television show.

Oh, and in case you're wondering, that's a Halloween kazoo in her mouth. You just never know what sort of treats they'll be handing out at Daddy's office.

Capture the Everyday is about getting you to capture those everyday moments in your life! Each Tuesday, Melissa at Adventuroo will issue a simple challenge to capture something that’s a part of your daily life. You can post just a picture or add some words to go along with it. You’ll have a week to get it done and then she’ll issue another. It’s a quick, easy way to start capturing those little parts of life we sometimes take for granted.
Posted by Convertible Girl at 11:01 PM