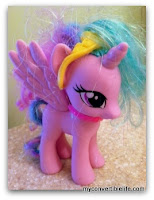 Each week, I drive Pippi and her friend Miss A to their afternoon dance class and then take Miss A home again. Eavesdropping from the front seat, I hear the news from preschool, learn which boys they plan to marry, and try not to laugh at their poop and fart jokes. Some weeks I wonder if the conversations will follow this same format when they're 10 years older.

Today Miss A mentioned that another girl in their preschool class had said something not very nice to her. After a little prodding from me, Miss A finally confessed that the girl told her she smelled like a monkey.

I stifled a grin, then asked if the girls knew the alternate version of the happy birthday song -- you know, the one that ends with the always clever line, "You look like a monkey, and you smell like one, too."

In spite of their obvious distress over the initial insult, they started to giggle about the song. So I asked Pippi to take a big deep sniff and double-check if Miss A did in fact smell like a monkey. Here is the delightful conversation that ensued.

Miss A: And YOU smell like a hairbow! No, a pony! [Note: I took that to be the My Little Pony scent, as opposed to the horse manure fragrance.]

So, in the spirit of positive preschool thinking, we're rewriting the song: "Happy birthday to you! You wear a tutu! You look like a princess, and you smell like one, too!"
Posted by Convertible Girl at 5:25 PM 2 comments:

If the worst thing that happens to me this week is that my iPhone can't be fixed, then I probably really shouldn't complain, right?

But of course I'm going to anyway. Consider it my public service cautionary tale for those seeking iPhone repair in Raleigh.

A few months ago, my iPhone tumbled out of the pocket of my coat onto the sidewalk at a precise angle that caused the screen to shatter in a spider web pattern shooting out from one side of the phone. Thankfully I had one of those clear protective sticker things across it, so it held the broken screen together and I was able to continue using my injured phone without any trouble.

On Tuesday morning, I finally take it to a local iPhone repair shop* that recently opened on Glenwood Avenue. The store is a third location for the company, which already has locations in Apex in Fuquay-Varina -- the Apex shop had been recommended by a friend, but Glenwood was so much more convenient. I drop off my phone with Tattoo Guy, run a few errands and return an hour later to a brand new screen for $80 including tax.

Magic! I am delighted.

Tuesday afternoon, my phone rings and I answer it -- only to discover that my friend can't hear me unless I am on speakerphone. After calling two more people to test the phone, I discover that in fact my phone -- which previously had functioned COMPLETELY FINE despite the cracked screen -- no longer works properly AS A PHONE.

I promptly call the repair shop and am told that my phone probably lost a connection and to bring it in and they would fix it. So I do that on Wednesday, thinking it will be no big deal.

After watching Tattoo Guy take the back off the phone, poke at everything, put it back together, make a failed call and repeat the whole process with no success, I get nervous. He then informs me that my phone has water damage and it must have affected the microphone.

Apparently Apple puts these little white stickers inside your phone -- when they get wet, they turn red. Sure enough, the tiny indicator sticker at the bottom of the inside of my phone at the charger port and beside the microphone was red. This is, of course, the same phone that had previously worked TOTALLY FINE and has never been dropped in water or spilled on. And I'm supposed to believe that my phone -- which worked TOTALLY FINE -- coincidentally stops working during the exact hour that I take it in to have the screen repaired. Um, sure.

He can replace the part, he tells me, but will have to get it from the Apex store because he doesn't have one in stock. He'll even "give" me $10 off the part, possibly because of the daggers that were shooting out of my eyes at him.

But what else am I supposed to do? Nothing is visibly wrong to suggest that they broke something. I don't have the knowledge, skills or tools to repair it myself. And I'm trying hard to remind myself that Tattoo Guy doesn't gain anything by purposefully screwing up my phone.

So this morning I take my phone BACK AGAIN at 9:30. Tattoo Guy tells me it will take about 30 minutes, so I go sit in my car and read through some reports for work. Of course, he has my phone, so I can't check email or catch up on phone calls, but I can't afford not to be working.

At 10:00, I go back inside the shop. He tells me the part didn't work and Apex Guy is bringing a different part, so it's going to take a little more time. Right.

When I tell him I need to use space at his counter and his wifi code so that I can work on my office laptop while I wait, he looks at me like I'm crazy -- then he must notice the actually crazy look in my eye and pulls a stool around to the counter for me before telling me the code.

Did I mention that they have the movie "Elf" playing on continuous reel on a television at the store counter? For all three days? And I realize that probably sounds like a treat to some of you, but to me it seemed like seasonally inappropriate taunting.

At 11:30 (TWO HOURS after I initially came in), I have to leave for an event at Junius' school. I tell Apex Guy that I have to go and will be back in an hour, then ask if there's any chance my phone will actually be fixed today. "He's working on it," Apex Guy assures me flatly. "Your phone is acting weird."

Right. Because you know, my iPhone has that quirky personality that can sometimes be hard to manage -- or maybe someone put a hex on it for Mardi Gras.

When I walk back into the store at 12:45, Tattoo Guy comes out of the back room holding my phone and says, "Yeah, it won't work. You're going to have to call Apple. I looked up some of the online info, and apparently this can happen after an impact."

Wow. So not only are you incapable of fixing my phone, but you also have no customer service skills either.

And this whole thing is just a crazy coincidence. Or as Tattoo Guy put it, "It's an electronic. Things happen." Um, sure.

At that point, I was done. I grabbed my phone from his hand, shot the stink eye one last time, turned on my heel and left. As I drove away, clutching the steering wheel in an angry death grip, I started up a variation of "Serenity NOW" as my new mantra:

Because really, if I've got a wonderful husband, beautiful children, a healthy body, great friends, loving family, a nice home, a good job and a new-ish car with heated seats, am I really going to let a broken iPhone mic destroy my whole day?

Okay, maybe for a little bit, I did. Because it just really sucks.

But now I'm better -- thanks for listening. And if you know any trustworthy iPhone repair shops in the Triangle area, let me know.

Update, 2/19/13: Since last week, I've discovered that basically anything that requires my phone to make a sound no longer works properly. That means my phone won't ring when someone calls or texts, I can't listen to music, I can't use the the alarm (except for the buzzing noise that the "vibrate" function makes), and I can't hear the little Spanish-speaking voice on the Duolingo app that Junius and I are using to practice Spanish words. Awesome.