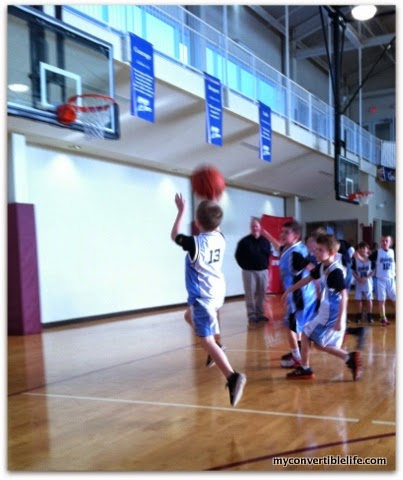 For a woman who never played organized sports growing up – unless you count driveway kickball, which wasn’t really all that organized but was highly competitive – I’ve made a real commitment to team athletics for my kids. Like many suburban moms, I drive them to and from practices, bring snacks, cheer for everyone and spend large chunks of my life sitting on bleachers in conditions that are often too cold or too hot to be pleasant.

While it’s nice to imagine that they might turn out to be college-scholarship athletes, I’m not overly concerned that they excel at the sports they play. As hokey as it sounds, I really just want them to learn how to be a good teammate, engage in healthy exercise, develop a few leadership skills, and have a lot of fun.

It’s more important to me that they learn how to be good sports than to be good at sports.

In his most recent basketball season, Junius and his team had a perfect record – they managed to go eight straight games without winning a single one. Coming off an undefeated season with his hockey team, I worried that he might lose interest in basketball – or at least in his teammates – given their apparent lack of success.

During the final game last month, Junius scored a personal best 14 points. But the game highlight occurred when the ball wasn’t even in play.

As he followed his team back into the gym after halftime, Junius ran in front of his team’s bench, launched into a halfway decent cartwheel and burst out laughing as he bounced down next to the other boys.

When I asked him after the game why he did the cartwheel – an unusually showy move for him – he replied simply, “I wanted to rally my team, mom!”

That cartwheel rally didn’t affect the game’s outcome, but it made an otherwise losing season worth every butt-numbing minute in the stands.
Posted by Convertible Girl at 10:16 PM 4 comments:

Last Wednesday, my husband and I picked up our kids from school at lunchtime and announced that we were taking them to Disney World for the first time. As in, right now, the car is packed, let’s go make dreams come true, we have three days to live the magic.

We expected their reaction would be something like this:

Children’s mouths drop, we beam at them lovingly. Their eyes light up as they shout, “SHUT THE FRONT DOOR! THAT’S INCREDIBLE! YOU ARE THE BEST PARENTS EVERRRRR!” And then we all melt into a group hug and sing Disney tunes for nine hours in the car.

Children’s faces remain blank. They look skeptical and mutter, “I don’t believe you. Are you serious?” We show them the packed car and the magic bands and promise that we are telling the truth. They complain, “But it’s Wednesday. We don’t want to miss P.E.” And we suggest that perhaps three days in Disney is even better than P.E. And then they both say, “Can I play on the iPad in the car?” Twenty minutes down the road they start asking if we are in Florida yet. The only Disney songs we sing are from the Frozen soundtrack on continuous loop.

Hmph. I don’t know what Mr. P is doing in those phys ed classes, but it must be incredible.

The good news is that they got progressively more excited throughout the nine-or-so-hour drive and were totally wound up by the time we checked into our hotel at 10 p.m. Awesome. Now that we’ve been back home for a few days, I’ve realized that taking your kids to Disney World for the first time is a lot like having your first newborn.

While you’re in the midst of it, you’re completely overwhelmed by the rapid swings between totally amazing and amazingly hard. But once it’s over, you forget all the crying and the exhaustion and that inexplicable sticky mess on your shirt. All you remember are the sweet, fun, photogenic moments and you decide you must do it again because you’ve learned so much from surviving the first one and you want to see if you can do an even better job the second time around.

At least the next time – if our bodies and our bank account can survive a next time – I’ll be expecting a different reaction when we give them the good news. Maybe it will go something like this:

Wow, Mom! That sounds even better than a whole day of P.E.!
Posted by Convertible Girl at 10:01 PM 2 comments: