On School Buildings and Why You Should Care 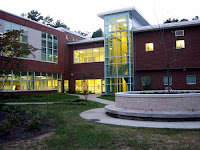 So if what I want is a Board of Education talking about powerful teaching and learning, then why do I care if my local school board retains control of school buildings? Because school facilities cannot be separated from academics -- an adequate and appropriate learning environment is a critical element of student success.

Senate Bill 236, sponsored by Sens. Neal Hunt (Wake), Tom Apodaca (Henderson) and Pete Brunstetter (Forsyth), would give county commissioners the authority to assume responsibility for the design, construction, maintenance, renovation, acquisition and ownership of school properties. Currently in North Carolina's 100 counties, the county board of commissioners provides the funding for school property purchases and construction (because they possess taxing authority and the school board does not), but the county board of education is responsible for the design, construction and ownership of school facilities. This divide, sometimes awkward and often contentious, is unusual -- more than 90 percent of school districts in the nation have fiscal independence (meaning they have taxing authority to fund their own budget).

The proposed legislation would allow all North Carolina county commissions to seize property currently owned by school boards --some county commissions might take advantage of that option now (as appears to be the case in Wake County), while others could decline for now and exercise the right at any point in the future.

I'm writing from the perspective of a Wake County resident (the bill started in the fight between the school board and the county commission in Wake), but this proposed legislation makes it an issue for the entire state. Here's why this bill is a bad idea:
There is one thing that Sen. Hunt and I agree on: school boards need to be able to focus on education. Unfortunately, he and Senate Bill 236 will cripple their ability to do just that.

Special thanks to Jennifer Brock, a Raleigh-based architect with years of experience in school design and mother of four WCPSS students, for her professional advising on this post.

Pippipalooza: Signs of a Big Girl

That's Pippi's new greeting -- she doesn't say hello anymore, just thrusts out her hand with fingers spread and proclaims her age as if it's the most important thing you need to know about her. Which, clearly, it is.

She's also been doing the things she's supposed to do -- occasionally -- and then announcing them with a knowing nod. "Look, Mommy. I'm brushing my hair without being asked. Because that's what five year olds do."

It's all a little comical, this notion that last month she was a baby and NOW she is a Big Girl. But it's also kind of true.

Here are five signs that she really is so very big:

1. Ice skating: She can now skate without holding onto a chair or a grown-up. It's not exactly speedy or graceful, but she can shuffle along on her own. This is a big deal when your older brother is a hockey player. 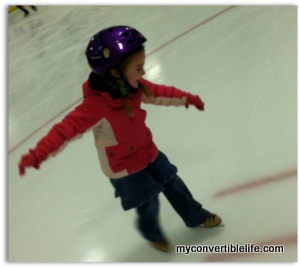 2. Dentist chair: At her recent dental check-up, she climbed right into the chair and leaned back without assistance -- no flinching, no complaining, no worries. At the previous visit, I had to lie on the chair with her stretched out on top of me during the whole exam and cleaning. I like this version much better. 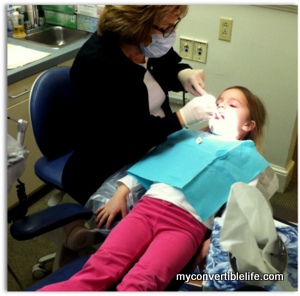 3. New bike: She's still using the training wheels (although probably not for long), but her new big girl bike is the same size as her brother's. It's also purple (to match her new helmet) and has spinney glittery spectacularness on the handle bars. It makes her legs look oh-so long. 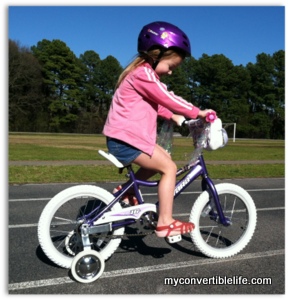 4. Bed decor: We still haven't totally finished decorating her nursery-turned-big-girl room yet (hence all the sketches taped all over her walls), but she actually has a duvet cover on her comforter now. It's grown-up Garnet Hill and beautiful. Thankfully, she still looks small all tucked in under it. 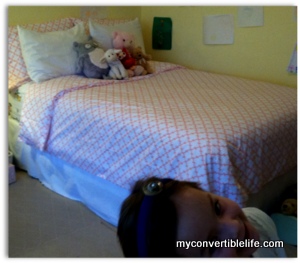 5. Potty: Now she's so big that she wants to use the bathroom alone. (Note that this does not translate into letting ME use the potty alone when we are at home.) I'm still jittery about allowing it in most public places, but now and then I try to give her a little privacy. Obviously, I'm not willing to go very far yet. 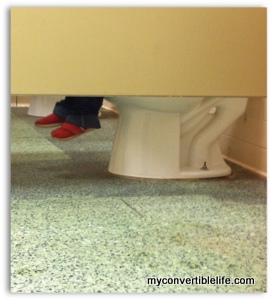 Sigh. The days are long, but the years go by at the speed of light.

Pippipalooza: Things She Loves to Do 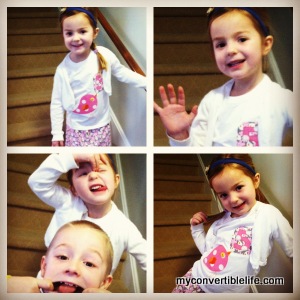 Somehow Pippipalooza 2013 came and went already, without a peep here at the blog. My baby girl turned five -- or as she says, "a WHOLE hand" -- at the end of February. In true Convertible Life style, we celebrated the day for a full week. Between the festivities and the rest of life, the blog just couldn't keep up.

But even though Pippi is a second child (or perhaps because of it), I'm trying to be sure she doesn't get slighted (too much). So today is the start of a belated "Five Days of Pippipalooza" blog posts... beginning with five things she loves to do.

It's not exactly news that Pippi has strong opinions. Can't imagine where she got that from (ahem). Sometimes that can be frustrating (to put it mildly), but sometimes it's just fun to watch. Here are five of her favorite activities:

And now a little party favor for you, courtesy of Pippi herself...