Turns out you can't get a convertible with a third row.

Or at least you can't get one unless you're the guys on Top Gear and you saw the top off of a minivan (or a "people carrier," as they call it). And although the effort is admirable (and the episode linked there is brilliant), that's not so much the look I'm going for.

So today we bought a Subaru. It was love at first drive.

When we went to the dealership over the weekend to test it out, I came armed with two high-back boosters and one regular booster seat. The salesman looked at me like I had three heads instead of three seats, but I was determined to know whether or not they would fit. 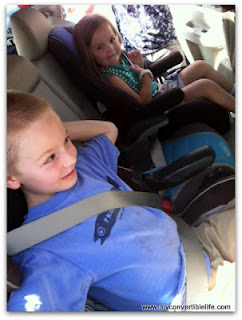 A little snug, but it totally worked. Then Junius proved that having the extra booster seat wedged into the middle wouldn't interfere with his comfort by promptly falling asleep during the test drive. Seriously, he just turns his head to the side and starts snoring. 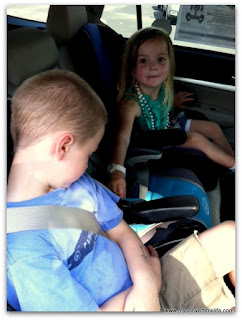 Four days and several emails later, we were back at the dealership to trade in our Honda Accord and bring home the new car.

This exchange marked the end of an era -- a decade with a car that saw us from newlyweds to new parents and beyond. It was the first big purchase my husband and I made together, then the first ride to bring home each of our days-old children. It saw us through interstate travels and tiresome commutes and at least a million trips to the grocery store. We have a lot of great memories tied up in that old car.

But still, who could have predicted this? 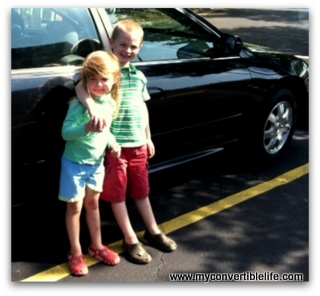 That's Pippi trying to be brave while completely falling apart as I tried to take a photo of her and Junius in front of the old car. 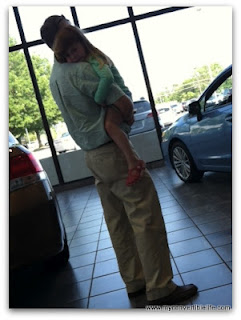 And that's Pippi sobbing on her daddy's shoulder while we wait on the paperwork. She cried for the better part of 20 minutes, only stopping to tell us that she wanted to keep the Honda until we died. (She's also wearing a turtleneck on an 85-degree day, but that's fodder for a different blog.)

It's hard to explain to a four-year-old that it's a good thing when we out-live our cars.

Junius managed to hold it together until we were pulling away in the new car. He teared up, looking over his shoulder as we left the Honda behind in the parking lot. Thanks to some Rock-O-Matic on the fabulous new stereo, he found his smile until bedtime, when more crying over the long-lost Honda ensued.

Who knows why they're suddenly so attached to a car that was slowly but surely falling apart from more than 137,000 miles worth of serious use -- maybe they're soft-hearted, nostalgic people or maybe they never realized that getting a new car meant giving up the old one. Maybe they just don't like change, even when it involves an upgrade. I really don't know.

What I do know is that, even though it's not a convertible, I'm going to love driving this Subaru. 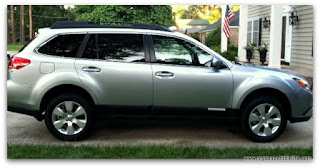 Share your story... What car do you still remember saying good-bye to? Or how did your kids react when you bought a new family car?

Adapted from a post May 17, 2011 -- We'll be walking in the Great Strides walk again this Saturday with the Super Dylan Team! 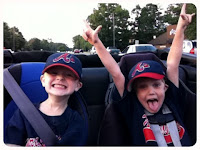 So it's pledge drive time again here at My Convertible Life -- we're raising funds for the Super Dylan Team and the Cystic Fibrosis Foundation's Great Strides walk. I'll be walking this Saturday in Raleigh with the fam and we need your support.

If you already know about Dylan and want to make a gift, you can stop reading now, click here to give online and feel confident that your money is going to a great cause.

If you don't know about Dylan or about cystic fibrosis, here are some old posts you can read to learn to more about one of Junius' best buddies and his battle against this chronic illness:

Now click on over and help us ensure that Dylan has lots more afternoons of slip-n-sliding with Junius and Pippi. And thanks in advance for your gift!
Posted by Convertible Girl at 10:28 PM No comments: 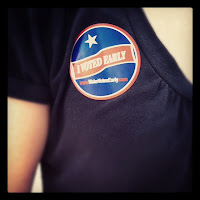 I really believed it would all end differently.

Kind of in that way that I believed Pippi would arrive naturally a week before my due date, that Carolina would win the NCAA tournament every year, that every piano contest I played in growing up would net me a superior rating.

But it didn't. And North Carolina broke my heart tonight.

Maybe I shouldn't be surprised -- North Carolina is still a very rural and religiously conservative state. My view from the state's urban areas where I've lived isn't the life that most North Carolinians see every day. Even though the "Vote Against" signs dominated in my neighborhood, apparently we're not as representative of the state as I believed we could be.

So I'm finding solace in the fact that Wake (Raleigh), Durham, Orange (Chapel Hill), Buncombe (Asheville), Mecklenburg (Charlotte), Watauga (Boone) and Chatham (Pittsboro) counties voted down the amendment. I'm focusing on the more than 800,000 people across the state who made their voices heard in opposition on the ballot. I'm remembering the small pleasures of discovering unexpected people who were voting against.

And I'm thinking how, years from now when my children are part of the movement to repeal this ridiculous mess, I'll tell them about tonight and how I believed, how I continued to believe. Then they'll wonder aloud why it took so long. And I'll smile and simply thank them for finally setting things straight.

Editor's note [May 9, 6:56 a.m.]: Had to adjust the list of counties based on updated vote tallies after I went to bed last night. Sadly Guilford, New Hanover and Forsyth counties swung for the amendment once all votes were counted.
Posted by Convertible Girl at 11:14 PM 4 comments: 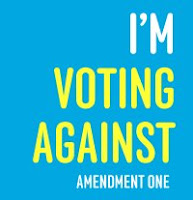 It's time to make me proud, North Carolina. Time to stand up and show the rest of the country -- and the world -- that we're not afraid to vote down a constitutional amendment that does nothing to protect the citizens of this great state. In case you haven't seen it yet, here's the exact wording of the amendment as it appears on the ballot:

Constitutional amendment to provide that marriage between one man and one woman is the only domestic legal union that shall be valid or recognized in this State.

You already know about I feel about this issue -- nothing about same-sex relationships threatens my marriage with my husband. Our wedding vows face a much greater danger from early-rising children and quality television programming.

But perhaps, with all the campaign rhetoric and general election babble, you haven't been able to discern your own opinion on the matter. Lucky for you, I'm here to help.

Here's a checklist to help you know if it's okay for you to VOTE NO on Amendment One. If ANY of the following statements (some of which are mutually exclusive) apply to you, then you should VOTE NO on Tuesday:
Okay, so I'm getting a little punchy and tired now, but you get the idea.

It's time to do the right thing, North Carolina. Vote AGAINST Amendment One on May 8.
Posted by Convertible Girl at 9:45 PM 6 comments: