In case you missed it, the Pope is on Instagram now. Pretty sure he's just copying my favorite @circuspadre, but it works. Today, for Good Friday, he posted a photo from outside the Colosseum in Rome with this caption: "Everything in these three days speaks of mercy." 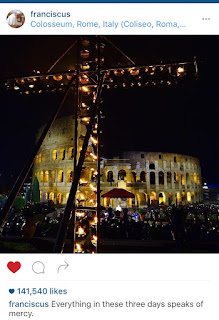 If only the North Carolina General Assembly would speak with mercy this week.

Instead, their legislative voice spoke only of fear and discrimination as they went into special session on Wednesday and voted to (among other things) prohibit cities from passing nondiscrimination laws, exclude groups of citizens from protection against discrimination in North Carolina and ban transgendered people from using public bathrooms that correspond to their gender identity.

As I binged through Twitter and Facebook yesterday (see #WeAreNotThis), searching for some reasonable answer as to why my state legislature has its head up its collective ass, I found nothing to help -- although this clip from John Oliver at least made me feel less alone. Then I saw a post from my friend Mamie, who happens to be a Presbyterian minister and a generally fabulous person. Although she no longer lives in North Carolina, she's still very much a Tar Heel -- and she's still fighting for those of us who are here.

With her permission, I'm sharing her post with you here. It's a letter she's sending to the CEOs and consumer affairs divisions of NC-based companies who have not yet spoken out publicly against the ridiculous discriminatory laws passed this week.

As a Tarheel born and bred, I have been horrified to see the changes happening in my home state. Living now, as I do, away from North Carolina, I see the pity and concern people have for those who are “unfortunate” enough to live in a state wracked by hate and discrimination, evidenced publicly by the repugnant actions taken by the current legislature. Any doubt remaining as to their oppressive intentions were put to rest yesterday when House Bill 2 passed into law with the signature of Gov. McCrory. The law goes well beyond its name and supposed intent to monitor bathrooms around the state. It takes away local protections for LGBTQ citizens, veterans and pregnant women as well as flaunts the desire of our forebears to be free of discrimination because of religion.

You have no doubt seen the threat that Walt Disney Studios has made to leave the state of Georgia if it passes a bill not unlike HB 2, and my neighboring state of Indiana lost 12 conventions and $60 million dollars after passing their “Religious Freedom Restoration Act” -- a law much closer to that just passed by North Carolina than its name would imply. The economic growth and prosperity of the state is now under threat, as is the reputation of any company who chooses North Carolina as its home. Red Hat CEO and President Jim Whitehurst, Biogen and Dow Public Policy all spoke out against this bill on the day it was hastily introduced. American Airlines, Wells Fargo and even the NCAA are concerned about this legalized discrimination. You can join their chorus in continued pressure to change the law so that equality and fairness are not undermined in North Carolina.

You are a leader in industry in the state, and as such, I urge you to speak out in favor of diversity and justice and against the codification of fear and weakness. Being based in North Carolina, your name and balance sheet are also on the line, and any silence you choose will speak. Your ability to attract a full-range of highly qualified, critical thinking, flexible and compassionate work force will be damaged by this law, and no tax breaks are worth diminishing the humanity of others. Please make the weight of your voice heard by the legislators and the people of North Carolina.

Signs You Have the Right Friends, Part 1 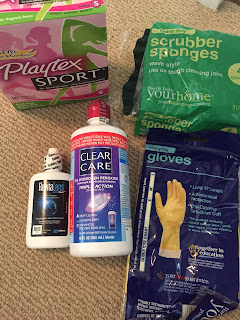 I recently emptied and reorganized the cleaning supplies/medicines/extra toiletries shelf in my linen closet. At left is the photo of items left over and no longer needed at my house that I then emailed to a select list of friends to see if anyone wanted something from the pile.

Within two hours and a dozen email exchanges, I'd not only found homes for all the stuff, I'd also been treated to hilarious stories of children using tampons as toys, requests for an extra box of sanity if I find any and one friend who wondered what category of sponges I was offering because she couldn't see the photo at first.

Nothing profound, but I couldn't stop laughing at the electronic trail we created based on a reject pile.

These are my people -- friends who a) don't think it's weird that I'm trying to give them my linen closet leftovers, b) help me clear out my house and c) entertain and distract me in the process.

Sometimes my life feels a lot like that shelf -- everything just kind of jumbled on top of everything else, much of it useful but not always accessible, some of it expired or unnecessary, all of it completely crammed in together. I'm just grateful I don't have to take care of it all on my own.
Posted by Convertible Girl at 1:22 PM 1 comment: