Pippi Wants You to Call Her, Maybe?

In the beginning there was Carly Rae Jepsen, bouncing and singing through my car stereo via my husband's iPhone. If you want to listen in, click the play button here: Call Me Maybe


Why had my husband downloaded this poppy tune onto his phone? I have no idea.

But there it was. And I mocked him a little. Okay, more than a little.

Then he showed me the video of Jimmy Fallon singing the song with Jepsen. With the Roots playing as their band. On elementary music classroom instruments.

And the whole family was hooked. We particularly like the man in the back left with the bongos on his shoulder -- I cannot make my head do that, but damn I wish I could.

We listened to the song about 847 times during our family road trip that weekend. So much so that for the past week and a half, I haven't been able to keep any other songs in my head.

On Friday, Pippi was sitting at her little table coloring and entertaining herself for a few glorious moments while I ate my lunch -- when suddenly I realized she was singing the same line from the song, over and over and over again.

When I asked her if I could make a movie for daddy, here's the performance I got:

So the video quality isn't exactly Jimmy Fallon -- but honestly, I didn't actually expect her to perform on command because she pretty much never ever does that. Ever. Which is why the video is vertical.

But you gotta love the gum smacking, sunglasses flipping, cheesy grinning four-year-old stuck on the line about how "all the other boys try to chase me." There's no coaching going on here, but clearly some quality pop culture parenting. And it places Pippi in the ranks of Colin Powell, as well.

Oh, and you're welcome. Now the song is stuck in your head, too.
Posted by Convertible Girl at 8:41 PM 13 comments:

Email ThisBlogThis!Share to TwitterShare to FacebookShare to Pinterest
Labels: made me laugh, music, Pippi

I'd never even heard of kale until it arrived in my Produce Box last year. Tried making kale chips -- because that seemed to be the item most people were raving about -- but the texture and flavor both left much to be desired. I disguised the rest of last summer's kale in stir fry and decided that would be enough of that.

Then I accidentally ate the most delicious sweet and savory kale side dish at a friend's house and discovered a new love for the super healthy green. Here's the recipe (taken from allrecipes.com), along with my annotations.

Let us know -- what's your favorite way to serve kale?

Photo from allrecipes.com.
Posted by Convertible Girl at 10:49 AM 3 comments:

Instagram is rapidly becoming one of my favorite social networks.

It's a quick, fun glimpse into the lives of my friends (both those I know in person and those I know only online) without all the extra baggage that comes with Facebook -- but it also posts to Facebook, so my friends who aren't on Instagram can still participate.

Plus it's a fun way to pretend that I have some sort of photography skill, which at least keeps me entertained even if no one else is paying attention. 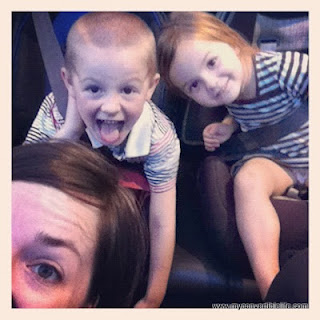 We were in the convertible with the top down -- my husband was driving, so I had the luxury of taking silly photos with my kids. In online responses to the photo, I got comments like "I love your happy children" and lots of "likes."

But in the interest of full disclosure, I must confess that the real scene was not so happy. Here's what I didn't post on Instagram from the same ride home: 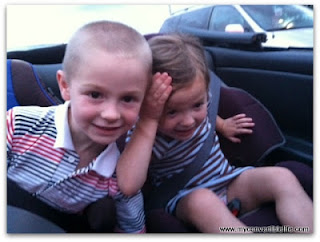 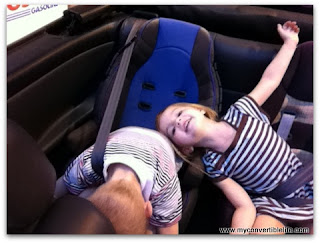 So I fussed at him for "hurting" her and he proceeded to pout, duck down and hide behind my seat. I took about four photos like this while I tried to coax him back out again. He mostly moaned, groaned, whined and complained. Notice that Pippi is now only too happy to lean in and smile. 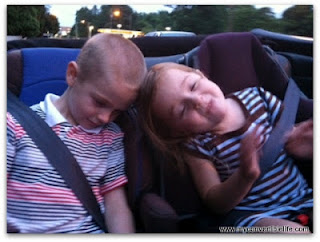 Then he finally sat back up in his seat, but refused to smile or look at me. The two of them took turns (hey -- at least they're sharing, right?) pushing and shoving against each other -- a dramatic re-enactment of the irresistible force paradox. 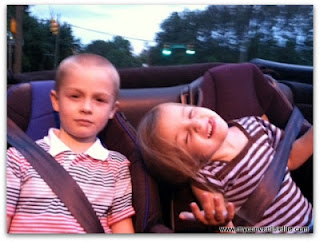 Eventually he gave up (she's younger, but I think her head is actually bigger), sat back and glared at me. In this photo it almost looks like he wants to smile, but I assure you he did not. As for her? Well, her favorite shtick is to be the opposite of him -- the grumpier he gets, the sillier she becomes.

Nothing like a 6-year-old grouch to take all the sunshine out of driving home with the top down.

For more stylish photos -- including one of my "dessert" cereal from last night -- you can find me on Instagram (and Twitter) @convertiblelife. This post was nudged by my friend Ms. S and by Mama Kat's Writing Prompts.

Posted by Convertible Girl at 8:05 AM 9 comments: