Today Dylan looked more or less like all the other second grade boys on the school field trip, with his gap-toothed grin, energetic legs, sweaty head and dirty fingernails, digging through the dirt for fossils at the Museum of Life + Science. In fact, most days when we see him, he's just like all the other kids.

Except for last summer, when we had to go to Duke Hospital to see Dylan. Then, for the first time since 2007, he looked more like a patient than the kid down the street. For two weeks, while a team of nurses and doctors poked and tested and treated him for an infection, we were reminded that in spite of looking and acting and generally being like all the other kids, Dylan has cystic fibrosis.

As CF patients go, he's been pretty healthy, according to his mom -- but his parents work hard to keep him that way. Each day, he takes more than 20 pills, three nebulizer treatments and two airway clearances -- and that's when he's well. If he has a lung infection, he can spend up to two hours a day doing breathing treatments. After his two-week hospitalization last summer, he spent another eight weeks at home on IV meds -- that meant no swimming in the pool for all of July and August.

So stop for a minute and imagine your daily routine with your kids.

Think about how full each day is and how often you're running late for school or work in the morning because they can't find their shoes or didn't remember their homework or need you to make an extra snack or are just generally being pissy. And think about how hard it is to get your kids to bed on time because there are always a hundred things, both real and imaginary, that suddenly have to be completed before you can get them to go to sleep.

Then imagine that in the midst of all that everyday chaos, you've also got to work in five different breathing treatments and convince your child to swallow 20 pills. Every. Single. Day.

Now if you're Dylan's mom, you don't complain about any of that. In the 7+ years that I've known her, not once have I heard her complain. Instead, she says things like this:


"That is a lot for a little guy to have to handle and as a mom it is hard to watch him having to endure all he does everyday. Dylan has made me a stronger person. He never gets a day off. I will continue to do all I can to keep him healthy until a cure is found."


On Saturday, my family and I will join with the rest of the Super Dylan Nation in the Cystic Fibrosis Foundation's Great Strides Walk. We will wear our red shirts and wind our way through downtown Raleigh for 3.1 miles. We will marvel at how our little friend with cystic fibrosis can run the whole 5K. We will celebrate all that his family does to keep him healthy.

And I will also say a quiet prayer of thanks that we can do something -- however small -- to help make CF stand for "cure found."

Click here if you'd like to join us on the walk, share your support through a donation to the Super Dylan team (no gift is too small!), or learn more about the CF Foundation.

And so over time, those posts collect in my brain and my fingers and get all tangled up until it's too hard to write once I finally do carve out some quiet time. The topics become too important or involved or complex to throw down in a 15-minute burst, and so I keep putting them off. It's kind of like how I don't call my best friends who live far away because I want to be sure I really have time to talk to them and of course I never really have that kind of time and so I keep not calling until it would probably take three days to cover all the things we want to talk about and we end up with a seven-minute cell phone chat in the carpool line instead which is totally unsatisfying and yet still better than nothing.

So tonight I'm starting to unpack that very crowded brain, beginning with the thing that's probably hardest to put into words. Which is funny, I guess, given that the whole event was about showcasing writing. 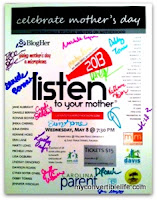 Last week I had the incredibly good fortune to share a stage with 14 other local writers as we gave motherhood a microphone. The inaugural Raleigh-Durham edition of the Listen to Your Mother show was simply amazing -- and I say that not because I was in it.

It's one thing to sit here at my laptop, spill all these stories onto the screen and hit publish. Sometimes people will leave comments or send a tweet, occasionally someone I know will reference a post in conversation. For the most part, it's just me and the silence of my own writing.

So it's another thing entirely to stand in front of hundreds of people who are laughing and giving me real-time feedback as I read my writing aloud. I probably should have been nervous -- my pale face in the spotlight with nothing but a music stand to shield me as I confessed my story. Instead, I just felt connected, like I was part of something, like I was where I belonged.

The next day, I couldn't believe I had to go to work and make lunches and do carpool and the ordinary bits of things like nothing had happened. But I suppose that's just like the miraculous ordinary of motherhood.

When the nation LTYM site posts the video from the show on their YouTube channel, I'll let you know. In the meantime, I just want to say thank you to my friends and family who supported me with good wishes before and after the show, to my sweet husband who greeted me with two dozen (!) roses in the auditorium, and to my fellow cast members who made the whole amazing night possible -- I don't know about the rest of you, but I'm ready to take this show on the road.

Links to other blog posts from the LTYM-RDU cast following the show: