When I took my first teaching job, I was 22 and working at West Charlotte High School with 11th grade students who were only about five years younger. The phrase "trial by fire" doesn't begin to capture that year, as many first-year teachers will tell you. When the students walked into my room on the first day, one of them looked me up and down quizzically, then blurted out the question everyone was thinking: "You the teacher?"

I had a lot to prove that year, partly due to my age and inexperience, but also because I was a white teacher in a historically black high school. Thankfully I found strong teachers in my department to guide me and I had some wonderful students who (maybe without knowing it) gave me as much encouragement as I tried to give them. I survived and even came back for a second year before school leadership changes required me to find a different school.

That was 15 years ago. Last month I had lunch with one of my students from that first year -- we've stayed in touch off and on over the years, even before the magic of Facebook. Shana is now a mom and a teacher in the Wake County Public School System. She's also African-American -- and not shy about laughing along with me about my severe and profound whiteness. I figured she would have a unique perspective on all this diversity vs. neighborhood schools mess, given where she went to school and what she can see now as a teacher and a parent. I was looking for answers and hoping she might have them. 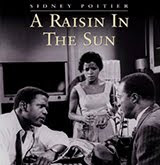 During my years at West Charlotte, my favorite lessons came from a unit I developed about Harlem Renaissance poetry and the Lorraine Hansberry play A Raisin in the Sun, named for a line from a Langston Hughes poem called "A Dream Deferred." The play revolves around a black family in the 1950s and what happens when the family's matriarch buys a house in a white neighborhood (not to make a statement, but simply because the house happens to be cheaper).

When Karl Lindner, a representative from the white neighborhood association, comes to their apartment and offers to buy them out, he says: "...I want you to believe me when I tell you that race prejudice simply doesn't enter into it. It is a matter of the people of Clybourne Park believing, rightly or wrongly, as I say, that for the happiness of all concerned that our Negro families are happier when they live in their own communities."

Their own communities. That's the line that jumped off the page for me. My students immediately hated Lindner, branding him an obvious racist. And they were right. But then I posed a question.

I asked my students if they stayed in "their own communities" when they were on campus -- in the cafeteria, during football games, after school in the parking lot. Well, sure...but those are our friends, they protested, that's different. And they turned the question back to me.

"For real, Ms. S. Wouldn't you rather just teach students who are like you?"

My students looked at me like I might be even crazier than they'd suspected, before I continued: "I'd rather teach students who are interested in school, who like learning, who pay attention in class, who do their homework on time and ask good questions. That's my school community -- that's a student who's like me."