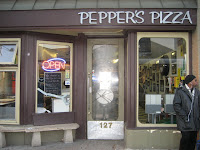 Even though Thomas Wolfe, himself a Tar Heel, said you can't go home again, I always like to try anyway when it comes to Chapel Hill. I spent four years there as an undergrad, then returned five years later for graduate school.

Over the years, one restaurant retained my unfailing loyalty:
Pepper's Pizza.

A couple weeks ago I had a work-related meeting in Chapel Hill, so I took the opportunity to head to the Hill early and treat myself to lunch at Pepper's. It's been a few years since I had eaten there, and I knew that the restaurant had changed locations, moving up Franklin Street a few spaces from its original site (shown here). I was nervous, hopeful, a little skeptical -- but I needed to know if it was still My Pepper's.

As I enjoyed my lunch (my "usual": diet coke, side salad no peppers no onions with ranch dressing, and a slice with zucchini and feta) which was thank goodness exactly wonderfully like it had always been, I had to laugh about how much things have changed.

Of course, the space is new -- much brighter and less grunge than the old space, with four televisions mounted on the walls. The wait staff still looked college-town-quirky, but none of the employees had multi-colored hair, large tattoos or excessive piercings. And even the music was different -- instead of head-banging alternative noise, I actually heard "Walking on Sunshine" (although, to be fair, that is one of my all-time favorite songs -- seriously, click the link and thank me later for putting that feel-good tune in your head and a skip in your step).

But what had really changed? Me.

Instead of walking up to Franklin from class or the dorm with a group of friends, I drove to the parking garage and ate alone with a magazine (and enjoyed it! how else would I get to read The New Yorker in peace?). Instead of wearing jeans and a t-shirt with birks, I was in suit trousers, dressy top, pearls and heels -- professional attire for my meeting, of course. After lunch, when the waitress shooed me back to my table (apparently you don't pay at the counter in Fancy Pepper's), I handed her my AmEx card instead of a wad of change and bills out of the pocket on my backpack.

But the salad was still the right balance of lettuce, tomatoes and mozzarella with just the right amount of dressing. And the pizza still has that perfect-not-too-thick-not-too-thin crust with just enough sauce, thinly sliced veggies and salty feta cheese. And the diet coke, refilled at exactly the right moment, still comes with that delightful pebbly ice.

Photo from UrbanSpoon.com.
Posted by Convertible Girl at 2:46 PM