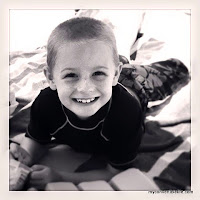 That's the first thing I remember my husband telling me about our newborn son after I regained consciousness following the c-section. Once he persuaded me that I wasn't actually dead, that proud new papa talked a blue streak about our sweet baby boy to bring me back to my now-expanded family.

"You should see his hands! He's amazing. Just a champion baby." He said it like I'd had some control over how this tiny baby had turned out, like we had really accomplished something.

And considering that we had just made an actual, real-live person, I guess we really did accomplish something.

Eight years later, that champion baby has turned into a champion boy. Eight.

It's a funny age -- too big to be little, yet still too little to be big. Some days, I think even he doesn't know which direction he wants to lean. And I'm not so sure either.

I love so many quirky things about the Junius who is temporarily trapped between infant and teen...

...that he says "funiture" and "tooken," but can explain the difference between a slapshot, a snapshot and a wrister.

...that he wants me to read to him at night, even though he can read whole chapter books on his own.

...that he asks to snuggle with me on the couch, even though he's so big I can barely pick him up anymore.

...that he cracks up at the poop jokes on Wait, Wait, Don't Tell Me, even though he doesn't understand the news context of most of the show.

..that he sleeps with Baby and Blanket tucked close beside him in bed, even though he leaves them at home when he sleeps over at a friend's house.

...that he asks me about my day sometimes, but mostly just wants to know if my favorite part of the day involved him.

In another eight years, he will ask to borrow the car and I will wonder where the time has gone. He'll probably know how to conjugate the verb "to take" by then and he likely won't be clutching a small, white teddy bear in his sleep. But with any luck, he'll still want to curl up on the couch with me and read a book or just talk about the day. And I'll try in vain to resist the urge to tell him he's still my champion baby.

Happy birthday, Junebug. I love you.
Posted by Convertible Girl at 11:37 PM