Three years ago this summer, I spent a couple of days with Junius at Duke Children's Hospital. Fortunately for both of us, Junius wasn't sick -- we were there visiting our buddy, Super Dylan. 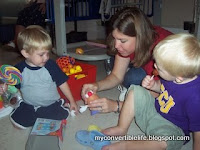 If you'd seen Junius and Super D during those visits, you wouldn't have guessed that either one of them was sick. They looked like any other pair of almost two-year-olds as they took turns pulling each other through the lobby in a wagon and chased each other around the fountain and the hospital playground -- this picture shows them playing on the floor in D's hospital room. But the truth is that Super D's powerful, feisty exterior hides the cystic fibrosis that threatens his life and keeps his lungs and digestive system from working properly.

At the time, we didn't even know Dylan and his family very well -- we were neighbors who were just becoming friends. But I'll never forget those visits and what I learned from watching Dylan's mom. During that 2-week stay at Duke three years ago, she never left the hospital. Two weeks. Never left, not even when friends or family were there with Dylan. Although I don't know what I would do if I were in her shoes, I do know that that much time in a hospital would make me crazy.

Yet she never complained (at least not out loud), never looked flustered, never seemed to resent being stuck. She just advocated for her son, loved him, helped him in every way that she could -- just as she does every day of the year.

So on this Mother's Day, I invite you to make a gift to the Cystic Fibrosis Foundation and our Super Dylan team. We're walking on Saturday to raise money to help Dylan -- but I'm sure that finding a cure would be the best Mother's Day gift for his mom and thousands of other moms around the world.

P.S. Dylan's mom is probably going to be annoyed with me for writing this post. She doesn't like attention and doesn't seem to think that she's anything extraordinary (which she is). So please make a gift, however small, so that she'll be a little less irritated with me. To learn more about CF and the Foundation, visit cff.org.
Posted by Convertible Girl at 11:41 AM