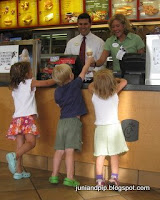 What starts with Buzz Lightyear and a Lightning McQueen lunchbox and ends with one very tired and slightly sandy four-year-old?

It's J-Fest 2009, a four-day birthday extravaganza!

Here's a list of the highlights from Junius's birthday and the three additional days of celebration:
The next morning, his first words to me were, "Did any more of my presents arrive?"

Dude can get his money's worth out of a birthday. Guess I can add that to the list of things he seems to have inherited from his mother.
Posted by Convertible Girl at 3:12 PM

Email ThisBlogThis!Share to TwitterShare to FacebookShare to Pinterest
Labels: growing up, Junius, summer