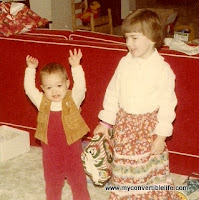 When my brother and I were little, we were fast playmates -- until we started fighting, of course, but we always made up eventually. Legos, house, Star Wars, school, Battleship, cops-and-robbers, kick ball, we played it all.

Part of what I love about having two kids is watching them play together and remembering those fun times from my own childhood.

Now that my brother and I are (allegedly) grown-ups, we've found ourselves on very different paths. I did the more-or-less traditional college-job-grad school-marriage-job-babies route. My brother? Not so much.

Only four years apart in age, but light years apart in other ways -- and yet we're still those same two playmates at heart, still able to make each other laugh.

This week my younger (but now much taller) brother is starting out on a new path.

But I thought that with all the collective strength and positive energy (and prayers, if you say them) out there in the bloggy world, that maybe we could send him off with a powerful force of hope and light to guide his way.

He's picked a much harder path than I did. But I'm trusting that his road-less-traveled strategy will pay off in the long run.
.
Posted by Convertible Girl at 1:14 PM