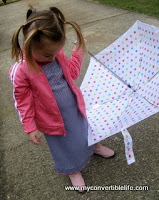 Since I was a kid, people have always commented on how much I look like my mom. When I hear that today, I consider it a compliment. But as a teen-ager, I never knew how to respond. I think it bothered me because I was trying so hard to be me -- whatever the hell that was supposed to be -- and didn't want to be seen as a duplicate of my mother.

Now that I'm a mom, I love when people say that Pippi looks like me. She doesn't really -- she looks a lot more like her brother and her father -- but given that she's stop-in-your-tracks beautiful, it's still nice to hear.

What surprises me more than the fact that she doesn't look like me is that she doesn't act like me in a lot of ways. At age three, she's already more independent and confident than I was (or maybe am) growing up.

Now if we can just teach her to use all this independent energy for good and not evil...