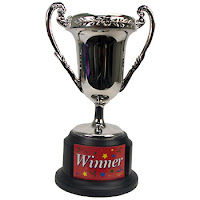 "You were smart to bring her in."

YES! I am Genius Mommy. My trophy will be arriving in the mail any day now.*

Of course, I realize I shouldn't be celebrating the fact that Pippi got her first ear infection yesterday (in both ears, no less). But it was so lovely to hear the pediatrician say those words to me, that I'm going to write them down again: "You were smart to bring her in."

Given the number of times I've taken my kids to the doctor only to be told that they have a cold and that there's nothing to do, I was more than a little pleased that I was right to take her in yesterday. She cried through most of the night before and was so fussy at preschool that morning that her teacher called me to see if I wanted to pick her up early. It was so out of character for her that I almost hoped she had an ear infection -- at least that was something we can fix (unlike, say, Early-Onset Twoish Terribilius).

Now, through the magic of amoxicillin, she's already doing better. And I'll be waiting at the mailbox for my award.

*Note: Trophy may be rescinded when the Committee finds out I let my children watch all of Toy Story 2 for the past two days while I fixed dinner, fed them and got them ready for bed so that I didn't have to listen to them whine.
Posted by Convertible Girl at 4:38 AM