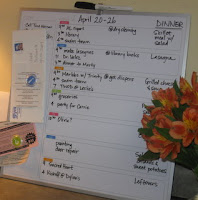 Before I got married, my regular dinner selections were pasta with alfredo sauce (usually all in one box), popcorn (a family tradition) or cereal with milk (my personal favorite). I never touched raw meat and probably never fixed anything with more than four ingredients in it.

When I became a (mostly) stay-at-home mom, I began making a real effort to cook more (including the occasional meat dish) to improve both our nutrition and our budget. But actually deciding what to have, finding a recipe I could manage and making it in time to eat was such a challenge that we resorted to frozen pizza, hot dogs or take-out more often than I'd like to admit.

So this year I finally decided to start meal-planning to try to make the dinner process go more smoothly and to add some variety to our menu. On Sunday nights, I write out what we're having for dinner each night of the coming week on a dry-erase board that I keep in the kitchen (see photo). I take into consideration what we have in the fridge/pantry, what we haven't eaten recently and what we have going on during the week, then try to pick meals accordingly.

It's not rocket science (and I realize other people have been doing it for ages), but this little one-week-at-a-time plan has made a world of difference at my house. Dinner is less stressful, we're wasting less food and my children are learning to eat something other than chicken nuggets and easy mac (not that there's anything wrong with that).

Out of the first 13 weeks, I was sick for one week (no cooking if Mommy can't keep anything down) and we were out of town for one week. So of the remaining 11 weeks in the first quarter:
Now let's see if I can keep going through second quarter. If you have a favorite recipe you'd like to share, please post it in the comments or leave a link behind. I'll be looking for new menus to take us through spring/summer.
Posted by Convertible Girl at 8:17 PM