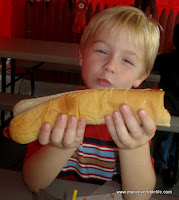 One of the funny things about having kids is watching them turn into people. As in, actual people with their own opinions and attitudes about everything on the planet.

I realize this might seem blindingly obvious, but somehow it startled me when Junius didn't like the clothes I picked for him. Or when he'd refuse to eat something that I knew for a fact to be delicious because he had decided he didn't like it.

What I'm most curious about is to see which of his opinions stick and which ones evolve over his lifetime. So in order to capture what he liked best as a five year-old (or at least on this particular day), here's a list of favorites according to Junius:

Tomorrow find out about all our celebrations during J-Fest 2011 as we prepare for the big day!
.
Posted by Convertible Girl at 6:20 AM