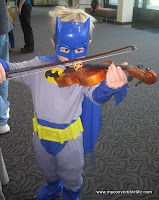 We're celebrating Junius all week as he turns 6!

Again, that's six years old, people. Crazy stuff -- and it means he can do all sorts of cool things that he couldn't do when he was a preschooler, including making more of his own decisions.

Sometimes that's hard for me to let go of, but it's also fun to watch him figure out what matters. And it's interesting to see when he has strong opinions about something that I wouldn't have predicted.

Here are five decisions he started making on his own over the past year:
In some ways these seem like small decisions, but it's a step. A little bit of control over his own young life. And before we know it, he'll be deciding on summer jobs and college tours and all sorts of big fat hairy deals -- hopefully getting in some practice early will help in the long run.
Posted by Convertible Girl at 6:19 AM