If you've ever met me, you probably know that nothing about me suggests I'm a camper. Happy, yes. But not a camper.

I have, on a few occasions with varying degrees of success, attempted to play a camper on TV. Or, more accurately, at a campsite.

Car camping. The way nature intended for us to camp. Freshly graduated from high school, my girlfriends and I drive up to our campsite, unload 47 bags (I'm just estimating), hike around the trails, lounge near the waterfalls in our bikinis, stay up too late talking, and use the bath house for showering and fixing our hair.
Verdict: Camping success. But no need to do it on a regular basis.

In an attempt to be way cooler than I actually am, I foolishly agree to go on a white water rafting/camping expedition with a high school group being supervised by some of my friends and fellow teachers. I borrow some gear and miserably fake my way through the whole trip, including hiking in to our campsite carrying everything with us. The constant rain and chill dampen my spirits (and my hair) beyond repair.
Verdict: Camping fail. Nothing good can come of sleeping in cold rain.

My sweet fiance (at the time) persuades me that beach camping is the best. Being a lifelong beach girl and devoted bride, I believe him. We drive from DC to the Outer Banks with no air conditioning on the hottest August day of the year, arriving at our campsite in time for a brutally icy shower before dinner. After a sleepless night battling bugs and sweat, my husband-to-be declares he's packing up the tent and doesn't speak to me for the next several hours. We go to a hotel and sulk for the second night of the trip.
Verdict: Camping fail. Thankfully we still got married six weeks later.

Only my lovely son could persuade me to try beach camping again -- and only he could convince his dad to let me. So last week, at Junius' request, we took our first full-family camping trip. My husband, to his great credit, spent time and money ensuring that we'd be prepared for success. Will have to write more later about the lessons we learned, but how could I not love a trip that included this: 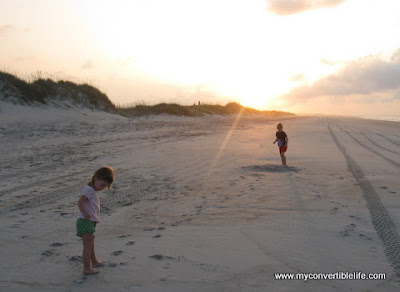