Remodeling 5: Things He Left Behind

Do you remember Eldin Bernecky?

He was the chatty house painter who essentially moved in with Murphy Brown for six seasons while he supposedly repainted her house.

Well, after four (plus) months of home renovation, we kind of have our own Eldin. At our house, he's known as Mr. Joey.

He didn't actually move in, although we considered inviting him -- but I think his daughters would have missed him. Thankfully, he just lives around the corner, so it's the next best thing.

He exorcised the demons of the previous homeowner's dangerous DIY trail. We called him whenever we needed him, even on Christmas Eve. He hugged and high-fived the kids every time he came over. We chatted about religion and politics and the latest neighborhood scoop. He checked in even when it wasn't his crew in the house, just to be sure things were going right.

We're going to miss him -- and I think he might miss us a little, too. So today's remodeling list is in honor of our own Eldin.

When you hire a contractor, you expect to find dust, invoices and maybe a tool or two at your house after he's gone. But here are five things we didn't expect our contractor to leave behind:

Oh, and that beat-up looking foyer where Pippi was sitting in the photo above? The one with the sad fake wood floor, dirty carpet, missing drywall and banged up closet door? 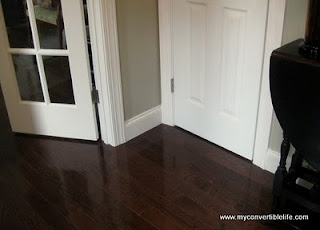 Remodeling Week:
Hire People You Trust
Eating Without a Kitchen
Tips for Prospective Remodelers
Kitchen Before and After
Posted by Convertible Girl at 5:20 AM