A Perfect Way to Welcome Fall

Today, while doing laundry, I found four hardened kernels of corn at the bottom of my washing machine. Under normal circumstances, that might seem strange -- but we spent last Saturday at Hill Ridge Farms, so I actually knew where they came from. 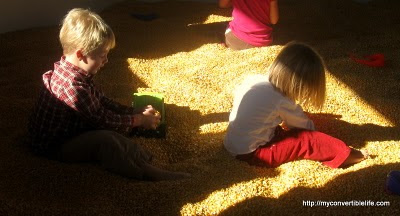 Apparently when you let your kids play in a huge sandbox filed with corn instead of sand, they're likely to bring some of it home in their pants. They're also likely to have an absolute blast.

Despite other people's recommendations, I've always been a little skeptical about the hayride-pumpkinpatch-cornmaze-farmanimals events that get publicized each fall -- just sounded itchy, smelly and cold. But some friends invited us to join them and the weather was perfect, so I agreed to go along.

As it turned out, I couldn't have hoped for a better day. From the moment we turned off Tarboro Road in Youngsville, the staff at Hill Ridge Farm was friendly, organized and attentive. We had an easy time in the parking lot, quickly got our tickets and were inside playing without any trouble (think Caniac Carnival, not that other family outing). We even arrived early enough to get in our train ride and hayride without waiting in line. 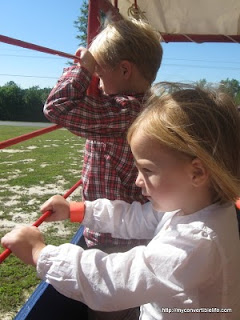 At $10 per ticket, it's not a cheap outing -- but each ticket gets to take home a pumpkin, so it's not a bad deal either. Plus I didn't feel as guilty about taking pictures while my kids wandered around the pumpkins as I do when we're pumpkin shopping at the farmer's market.

After all that playing and pumpkin-picking, we needed a break and a snack. Pippi begged for kettle corn -- and again I was suspicious, as I'm a traditional movie-theater popcorn kind of girl. But oh-my-delicious-freshly-popped-sweet-and-salty-goodness, I take it all back. The suspicion, that is, not the kettle corn. Because we ate it all. And we didn't feed any of it to the animals, even when they tried showing us their most clever tricks. Because the signs say not to share people food with the animals, and it was hard enough sharing it just among the four of us. 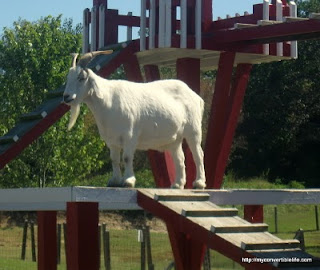 The morning's big finish involved a slide built into a hill, complete with little burlap sack to help the ride along. In the not-too-distant past, Junius would have been too afraid to try this on his own, but here's my big boy now. Might have made me a little misty-eyed if he hadn't been having so much fun. 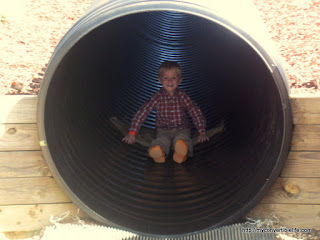 All in all, it was a spectacular morning for the whole family, plus we all took glorious naps when we got back home. A perfect fall Saturday, if you ask me.

A few final tips, in case you're planning to head out there this weekend:

Posted by Convertible Girl at 4:58 AM