Ode to the Expired Passport

Last week my husband and I pulled out our passports -- I'm embarrassed to report that both had expired in 2003. It's one of those things we kept meaning to do -- then new job, new house, new baby, another job, another house, another baby, more jobs, yet another house, and here we are seven years later without having needed a passport.

Just hours after I'd been inspecting my passport photo (hello, 1993 -- how's that curling iron working for you?), I read this post by fellow Triangle blogger Fadra. And given that imitation is the sincerest form of flattery (right?), I decided to write my own version. 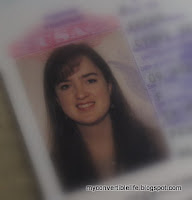 So, of course, we must start with the photo page. When I showed a friend this picture, she guessed that 6 out 10 current friends would not have recognized this as me. I'm going to take that as a compliment about how current and hip and trendy I look now. And yes, in fact, I did think I had beautiful Brook Shields eyebrows back then, thankyouverymuch.

Sadly, it turns out that my passport never got stamped in many of the countries I visited -- no markings from Germany, Switzerland, Italy, Ireland or one of the trips I made to France. But there are three stamps that hold the greatest significance for me. 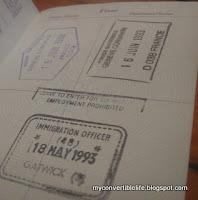 First, the stamp shown here at the bottom is the reason I got my passport in 1993 -- summer study abroad in London with a class from UNC.

That trip was probably the boldest decision I made in college -- spending the summer overseas without any friends or family. Thankfully, I made a great friend on that trip who joined me on Eurail after our course was over -- and who is still one of my dearest friends today. Anyone who can survive that kind of travel with me -- and deal with my homesickness -- is a friend forever. 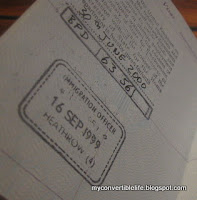 The next stamp, six years later, landed me in the same airport, but with a special pass that allowed me to stay for a full year.

I left Hurricane Floyd behind at the Greensboro airport, but I was my own personal disaster for the next few weeks while I tried to get my feet on the ground. For one year, I studied magazine journalism at Cardiff University -- and traveling around Europe whenever I had the chance -- while I proved to myself that I could not only survive, but even thrive away from the comforts and familiar faces of home. 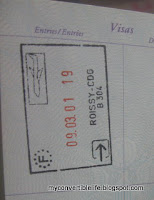 And finally, for the last stamp in this passport, I wasn't traveling alone -- but the trip turned out to be the most memorable in many ways.

This little stamp from Charles de Gaulle airport marks the day before my husband pulled a sparkling diamond ring from his pocket as he knelt in front of me on the Pont Neuf in Paris. It's the only overseas trip we've taken together -- so far.

Here's hoping that over the next 10 years our new passports will be filled with matching stamps as happy reminders of shared experiences.

Posted by Convertible Girl at 9:37 AM