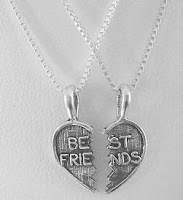 Three years ago this month, my husband and I sold our house in Raleigh, packed up our stuff (and two-year-old Junius) and moved in with my parents in Greensboro so that we could be closer to a job opportunity. Two months later, we bought a house there and attempted to settle in before Pippi arrived -- which is to say I was on a desperate hunt for friends before the newborn craziness started.

I loitered at parks near my neighborhood, hovered around the baby pool, practically stalked women by the entrance at Junius's preschool. Some women ignored me, but most were nice and many stopped to chat -- still, nothing clicked. It felt like I was 21 again, trying to meet guys at a bar ("Hey, didn't you go to Carolina?"), but worse -- no loud music or alcohol to mask the awkwardness, and with a crazy toddler at my side.

When I spied a similarly pregnant mom with a young son at the Children's Museum one day that fall, I nearly threw myself at her feet -- as our boys miraculously started playing nicely beside each other at the train table, we had enough time to talk and discover that our baby girls were due within a month of each other. Before she left, she asked for my phone number. That night, I'm pretty sure my husband thought I'd gotten digits from Brad Pitt -- I was that excited. "SHE asked me for MY number!" I kept saying, like somehow that made me seem more desirable.

This scene flashed through my mind last week when Brenna at Suburban Snapshots wrote about the difficulties she's had making good friends as a full-time working mom in her 30s. "Is there a cut-off to making lasting friendships?" she asked. The post clearly resonated with lots of people -- within days, she had 50 comments and 46 shares on Facebook, mostly from women who were facing the same loneliness, whether they were SAHM, WAHM or full-time in an office with no children.

The truth is that dating women sucks. I realize I don't shower every day and sometimes I'm kind of opinionated, but I like to think I'm generally a socially acceptable, easy-going, relatively interesting person -- and finding good friends was really hard. Maybe it's just that we're all so busy -- with jobs, kids, husbands, houses and more. Maybe, as some of Brenna's commenters noted, making friends in motherhood is more complicated -- it's harder to put on a pretty face when you've got baby spit-up down your back and your 3-year-old is screaming because another kid just whacked him on the nose.

As it turned out, our stay in Greensboro lasted less than a year before we moved back to the same neighborhood we'd just left in Raleigh. (It's a long story and requires adult beverages, so feel free to invite me over if you really want to hear it.) And so I was blessed (and I mean that literally) to come back to a group of friends who were still here and still loved me. But I've never forgotten those lonely days, wandering the stacks of the children's section at the Greensboro library, hoping some cool mom and I might reach for the same Curious George book at the same time and realize we were destined to be friends.

So when you see that mom who looks like she's eavesdropping on your conversation at the park, invite her in next time. It will do you little harm and do someone else immeasurable good. Dating is hard enough without having to come up with a pick-up line at the swings.

Friendship necklace photo from HandCraftedCollectibles. I never had my own.

Posted by Convertible Girl at 9:41 PM