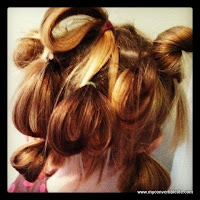 Much to Pippi's chagrin, Pippipalooza 2012 has finally come to a close. She has delivered most of the party thank you notes, played with all of the presents and announced to every man, woman and child within a 10 mile radius that "and also? I am Four."

So I'll close out this year's festivities with a fun photo and a fave five list. The picture is her fancy hairdo that set a new household record -- that's eight rubber bands on one round head. We were proud.

And here are five of my favorite posts that helped to capture her year of being three:

Catch up on Pippipalooza 2012:
- It's On
- Preschool Musical
- Such a Big Girl
- The Party Plan
- Behind the Party Scenes
Posted by Convertible Girl at 7:26 PM