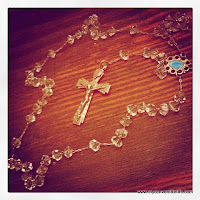 I’m giving up Catholicism for Lent.

In past years, I’ve been on and off with my success in Lenten sacrifice. I’ve done the usual sweets or drinks or that sort of thing. I tried giving up fear one year – but when I went to donate blood (one of the many things I’m afraid of), it turned out I was ineligible.

Probably my best year was one in high school when I gave up an hour each week before school to go to communion service with my dad.

Last month, I started thinking about what behaviors were blocking me from being closer to God -- those things that were obstacles on my journey toward Easter. And I realized, suddenly, it was all the complaining I do about my church. Or, more specifically, my Church.

So I decided it was time to give it up -- the complaining, at least.

Being Catholic is something I was born into. Then it was the religion I chose for myself, following on from my father and grandfather and back to Germany. Catholic churches consecrated my wedding and the baptisms of my two children. In Catholicism, I feel the power of history along with the power of God.

But in the words of Father Frank, I've been a Catholic clutching "the fringe of the carpet of faith" for a long time. When the language changes in the mass took effect in December, it was enough to further weaken my already tenuous grip.

This month we've gone to Sunday services at an Episcopal church for the first time. In some ways it's a lot like Catholic church -- the basic structure of the service is the same, including Communion, the readings, and all the kneeling and standing. In other ways, it's completely different -- like the fact that all four ministers are married and two of them are (gasp!) women.

It's too soon to tell yet if we've found a new church home -- but I will say that the reserved parking space for first-time visitors got us off to a good start. For now, I'm saying prayers, asking questions and forgiving myself for not knowing the answers.


Earlier posts from my religious wrestling:
- Mere Churchianity
- Still Catholic After All These Years
Posted by Convertible Girl at 6:56 AM

Email ThisBlogThis!Share to TwitterShare to FacebookShare to Pinterest
Labels: religion