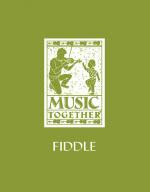 When I was four years old, my mother took me to Kindermusik classes -- some of the first in the U.S. My mom then became my first piano teacher, starting me on lessons that would last through three other teachers until I graduated high school. I also studied flute and sang in school and church choirs. Later, my mom became a Musikgarten teacher, singing and dancing with other moms and babies.

Given that history, and the fact that my kids really love all sorts of music and dancing, I'm somewhat embarrassed to admit that I finally took Junius and Pippi to our first music class last week. But better late than never -- all three of us had a great time singing, playing, dancing and jumping along with Ms. Angela and the nine other mommies and 12 other children. In addition to being great fun in a musical learning environment, it's also one of the few activities I could take the kids to at the same time -- not a lot of kids programs are open to both a 4-year-old and a 19-month-old.

During the class, Ms. Angela encouraged all the mommies to sing regularly to their children. "No matter what you think your voice sounds like," she said, "your children will think it's the most beautiful sound they've ever heard." I liked that advice and decided this was a good time to stop listening to NPR in the car and start singing along with our new Music Together CD.

So on our way to Nanna and PopPop's house last week, I put in the disc -- the kids were smiling and clapping and trying to sing along. And I'm thinking what a great mommy I am that I can take them to this fun class and then sing with them in the car and how happy they must be to hear my beautiful voice.

Then Junius pipes up from the back seat. "Mommy," he says. "When you are singing...?"

And I'm waiting for him to say how much fun it is when I sing and he can sing and Pippi is learning to sing and how much he loves me...

"Mommy, when you are singing," he says, "I can't hear the music. Mommy, please don't sing."

His comment left me speechless, thus having the desired effect.

I'm just hoping he won't complain when I start singing even louder in class this week.

Image from Music Together.
Posted by Convertible Girl at 12:31 PM

Email ThisBlogThis!Share to TwitterShare to FacebookShare to Pinterest
Labels: family, Junius, made me laugh, music, Pippi