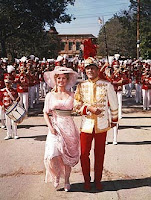 A couple of years ago, I heard an interview with Ty Burr, the author of a great book about watching old movies with your family. He talked about how his daughter chose to have a Katharine Hepburn party for her ninth birthday with a screening of Bringing Up Baby. Listening to the story, I thought his daughter might be the coolest nine-year-old on the planet.

As someone who only discovered old movies as an adult, I loved the idea of introducing classic films to children in ways they can enjoy. I mean, Cars and Toy Story are loads of fun to watch, but I want my kids to know there was film life before Pixar animation. We'll start on the list for toddlers in Burr's book soon, but in the meantime, here are five "retro" movies that Junius has already enjoyed:
Photo from The Music Man Square.
Posted by Convertible Girl at 10:03 AM