High on my long list of worries as a mom was when to let Junius start kindergarten. 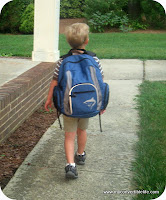 When he was born in early July, North Carolina's kindergarten cut-off date was in mid-October -- no reason for worry. But a couple years later, the state shifted the line to the end of August. Suddenly my summer baby was on track to be among the youngest kids in his class.

During his two-year-old preschool class, I met several moms who were already planning on holding their sons (and it's almost always sons) for an extra year of preschool because their birthdays were in (...wait for it...) APRIL. Under that plan, if Junius started school on time, he'd be 15 months younger than those kids in his class.

A year later, we moved and nearly all of Junius' friends -- even those with August birthdays -- started school on time. He was ready to go to kindergarten, and his preschool teacher confirmed that there was no reason to hold him back. Now as a fourth-quarter first-grader, he's doing fine, both socially and academically.

I'm not the first parent to wrestle with when to start my child in kindergarten -- and I certainly won't be the last. This article in the LA Times or this piece from a March episode of 60 Minutes show what a widespread issue redshirting has become. For some families, in the words of the 60 Minutes producer, deciding when to start your child in kindergarten feels like a bigger decisions than selecting a college.

So here's my caveat before I climb on my soapbox (you knew the soapbox was coming out, right?): All parents have to make decisions based on what is best for their family and for their children. Period. I fully recognize that the criteria I use for making those decisions may not apply in the same way for your family.

And now for the soapbox: Redshirting feels like an arms race. You have a child with an August birthday and you don't want him to be the youngest kid there, so you hold him back a year and he's 13 months older than his youngest classmate. So another mom gets nervous about that and she holds back her July baby and so her friend holds back his June baby and before you know it there's an 18-month age spread in one class.

Fast-forward a few months into kindergarten -- the kid who started at age 5 is just learning to read, while his classmate who started at age 6 1/2 is bored with early readers. Now the teacher in that classroom has to differentiate instruction across an even wider spectrum, making an already tough job even more challenging.

Redshirting is also an arms race in which only those with the luxury of child care can afford to participate. Holding your child out of public school for an extra year means that you can afford to stay home with that child or put that child in a private preschool or daycare.

The research on whether there's a real and lasting impact from school-start age is split. But I question how any study that examines the results for students who start on time versus those who start late can separate out other factors like family income, parent education levels and the like -- because if low-income families (which often corresponds with lower parent education levels) can't afford to redshirt their kids, then there's no way know what differences are caused by redshirting and what is simply the result of having parents with the resources to give a child every possible advantage.

The bottom line? Unless your child has a true disability -- like a physical impairment, cognitive disability or emotional delay -- then the cut-off date applies to you and you should abide by it. The date is arbitrary and it varies by state, but it's there for a reason. Worrying that your child might be smaller than the other kids in his class or might not be the fastest reader in her class are not legitimate reasons for holding them back. Kindergarten is all about growth -- while they're in school, they'll get taller, they'll learn, they'll develop, right along with their classmates.

And if you want to avoid the issue altogether, invest in some serious family planning to ensure that your baby is born in January.

Okay, I'm off the soapbox now and bracing myself for the hate mail. What about you? Have you faced this issue with your kids? Or were you the youngest or oldest in your class growing up? Leave a comment to let us know your thoughts.
Posted by Convertible Girl at 5:42 PM