Why Yes, Thank You, My Hair IS Adorable

"J-Fest 2009: Turning Four" update coming soon, but in the meantime I'll give you a little story about the Pip:

Although we waited until his birth to see if Junius would be a boy or a girl, we decided to find out in advance with Pippi. When the ultrasound tech said, "It's a girl," we were stunned into silence. Somehow, we'd both convinced ourselves it was another boy -- and we were excited about having a matched pair. We didn't tell anyone for at least a week, it was that much of a shock.

I was immediately terrified by visions of a moody, dramatic, teen-aged daughter whining and complaining and hating me for no good reason. I knew from experience that even daughters who really love their moms are sometimes unreasonably snotty to their mothers without cause (Mom -- I am so sorry!), and I just didn't want to deal with that.

Thankfully, my mama-friends with daughters talked me down off the ledge, so that by the time Pippi arrived I was delighted to have a baby girl. She's already a moody drama queen at age 16 months, so I'm sure the teen years will bring plenty of challenges (ahem, I mean growth opportunities?) -- but she's silly and sweet and sassy and snuggly in ways that are different from her brother, which is fun to watch.

She also brings with her all the fun, girly stuff. I mean, let's be honest -- girl clothes are soooo much cuter than boy clothes.

And then, this past week, our first experiment with pigtails... 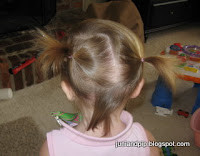 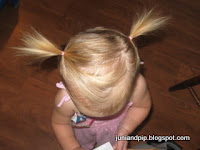 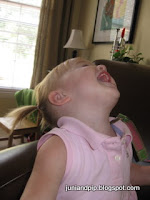 Sadly I don't have a picture of her admiring her hair-do in the mirror, but I think the laughing photo gives you an idea of just how impressed she is with herself. Looks like we'll be waiting a little longer for that first haircut this time around.
.
Posted by Convertible Girl at 9:39 AM