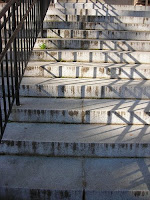 I've had two moments in my life when I was strangely certain of something that I couldn't possibly know.

One was when I found out I was pregnant for the first time. I peed on the stick, waited, looked at the little lines magically appearing in the window, and knew immediately that I was having a son. I can't explain it, but it was just the first thought in my head. It was clear and loud -- and it turned out to be accurate.

The other odd moment of clarity and clairvoyance happened some years earlier, one sunny August day on the steps of Carroll Hall at UNC-Chapel Hill. It was my second day as a master's degree student, and I'd just introduced myself in the hallway to the handsome Ph.D. student who was teaching the Intro to Public Relations class I'd attended the day before.

As I bounced down those steps into the sunshine, I thought, "I have met my husband."

Six months later, we were engaged. Six months after that, we were married. When you know, you know.
Posted by Convertible Girl at 2:03 PM