Loving the Ladies in Lakemont

As if the ice cream parties, the babysitting co-op, the craft projects, the bunco evenings, the poker nights, the Third Friday Happy Hours, the fundraisers and the meal calendars weren't enough fabulousness, last weekend brought my Lakemont love to a whole new over-the-top level. 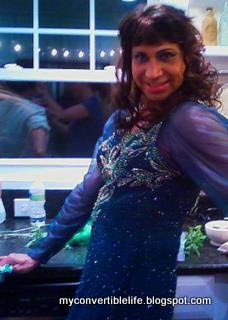 Yes, that's a drag queen. In my friend's kitchen during a break between sets. You know, cause that's how we roll over here in midtown.

S/he was there for my friend (who is also her/his friend) because said friend was in need of some cheering up. And how better to find your smile than with a house full of dancing girlfriends and gay men, a chilled pitcher of cosmojitos, and a gorgeous man wearing sequins and false eyelashes belting out lip-synched versions of Whitney Houston songs?

What? That's not what you do in your neighborhood? Well, too bad -- because it rocked. Even after an anonymous neighbor (who was understandably bothered by the decibel level from the backyard around midnight) called the police.

Guess we'll just have to start a little earlier next time so as not to violate the noise curfew. Because I'm sure there will be a next time.
Posted by Convertible Girl at 1:58 PM