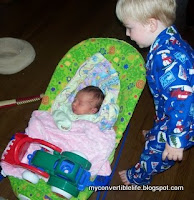 My baby girl is about to turn two (yikes!), but before she was born I worried (like many other moms) about what her arrival would do to my first-born. How would I be able to love and care for both of them? Would Junius resent having to share me and his dad with a new baby? What if he didn't love her because she knocked him loose from his position as sole center of the universe?

At the time, I turned to the world's greatest resource -- mom friends with more than one child -- and this is what they told me: "Just as beautiful as loving your own child is watching your children love each other. Oh, and sometimes they will fight and hate each other, too." The truth is that somehow we, as parents, stretch and grow to do everything (including love) with two -- and our children do, too. And for every minute of one-on-one parent time that Junius got, Pippi gets the bonus of one-on-one time with an awesome brother.

For my many friends having second babies, here are some things to look forward to... My list of five things I love about Junius as a big brother:

Posted by Convertible Girl at 3:04 PM